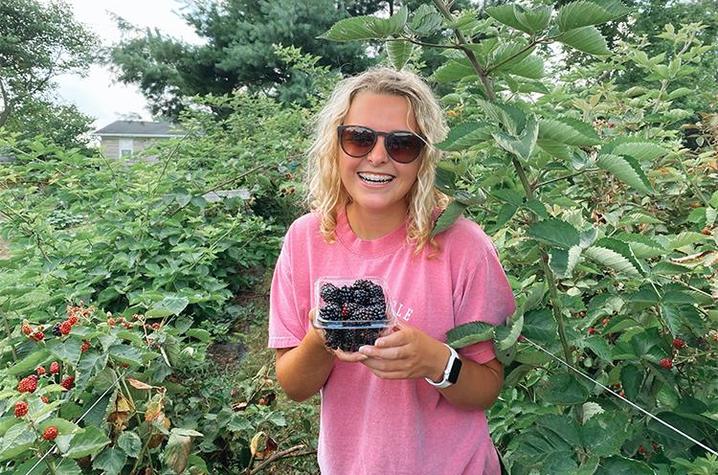 LEXINGTON, Ky. (Aug 6, 2020) — A University of Kentucky College of Agriculture, Food and Environment student is contributing to research that could lead to healthier habits and lower negative health outcomes in her native Eastern Kentucky.

“I have always wanted to give back to Eastern Kentucky,” said Lucinda Smith, a senior human nutrition major from Corbin. “When I learned through one of my classes that Dawn Brewer was doing research in Eastern Kentucky, I knew I had to meet her and could barely wait to get out of class (to talk to her).”

In 2019, Smith began working with Brewer, who is an assistant professor in the Department of Dietetics and Human Nutrition and leader of the Community Engagement Core of UK’s Superfund Research Center, which is funded by the National Institutes of Environmental Health Sciences. The Community Engagement Core seeks to empower and educate individuals who live near hazardous waste sites about ways they can use nutrition to improve their health and reduce their risks of negative health impacts associated with exposure to Superfund environmental pollutants.

This summer, Smith received an undergraduate research award from the College of Agriculture, Food and Environment and matched by the Department of Dietetics and Human Nutrition. The award allowed her to map the location of blackberry bushes that were distributed through the Community Engagement Core and Berea College’s Grow Appalachia program as part of their gardening grant program. The bushes were distributed to individuals earlier this year by grant recipients at the Cowan Community Center in Letcher County and the Red Bird Mission Community Outreach Clinic in Clay County. Each participant received between six and eight bushes and growing supplies.

“In an earlier survey, many people in the project said they loved blackberries, but they were often too expensive for them to purchase,” Smith said. “Blackberries are also a plant that grows well in Kentucky and are easy to plant and maintain. They contain phytonutrients and antioxidants, which help reduce oxidation and inflammation.”

Smith’s maps showed the location where recipients planted the bushes and combined the demographic data of the 89 project participants in those two counties. She collaborated with Josh Knight, UK senior extension associate with the Center for Crop Diversification, to make the maps and received location data from Grow Appalachia.

“Lucinda’s work gives a nice visual to share with our current and potential sponsors so they can see the reach of our program, particularly throughout Eastern Kentucky,” Brewer said.

An additional part of the project will measure the amount of fruit each family harvests and how they use their berries.

Along with the maps, Smith has helped develop supplemental material for the BerryCare Extension curriculum, which was developed by Brewer and teaches people about the health benefits of blackberries and ways to incorporate them into their diets. Due to COVID-19 impacts, she is helping maintain and harvest berries at the Boyle County Senior Center, who also received blackberry plants through the Community Engagement Core.

Smith wants to become a family doctor and hopefully practice in Eastern Kentucky. Since coming to UK, she has developed a better understanding about the connections between nutrition and health.

“Through my human nutrition classes, I have been able to learn about the importance of a good diet, and by working with the Community Engagement Core, I have learned more about the effects of nutrition on the body,” Smith said. “I have also had the opportunity to shadow a family doctor who specializes in chronic care to see how diet has contributed to her patients’ chronic diseases.”

The University of Kentucky is increasingly the first choice for students, faculty and staff to pursue their passions and their professional goals. In the last two years, Forbes has named UK among the best employers for diversity, and INSIGHT into Diversity recognized us as a Diversity Champion three years running. UK is ranked among the top 30 campuses in the nation for LGBTQ* inclusion and safety. UK has been judged a “Great College to Work for" two years in a row, and UK is among only 22 universities in the country on Forbes' list of "America's Best Employers."  We are ranked among the top 10 percent of public institutions for research expenditures — a tangible symbol of our breadth and depth as a university focused on discovery that changes lives and communities. And our patients know and appreciate the fact that UK HealthCare has been named the state’s top hospital for four straight years. Accolades and honors are great. But they are more important for what they represent: the idea that creating a community of belonging and commitment to excellence is how we honor our mission to be not simply the University of Kentucky, but the University for Kentucky.