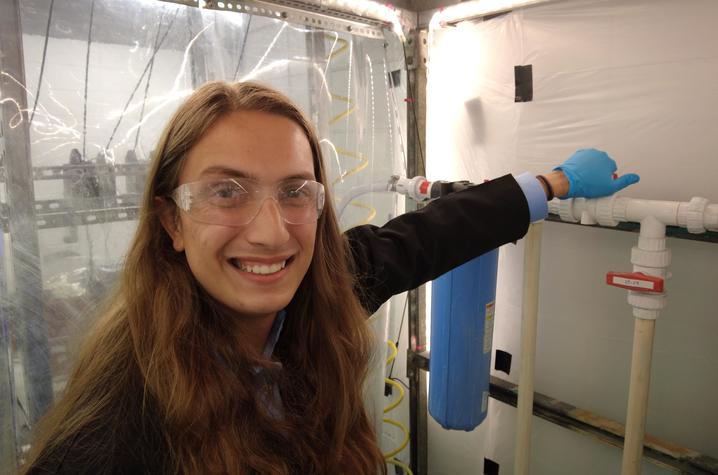 The Lee T. Todd, Jr. Student Innovation Scholarship is a unique undergraduate research scholarship provided by the UK Center for Applied Energy Research (CAER) and funded through philanthropic donations. Focused on inspiring and training the next generation Kentucky high-tech entrepreneurs, this scholarship will allow Bertucci to build his own research project under the mentorship of a CAER researcher. In addition, he will be paired with an entrepreneurial mentor to help him learn more about the commercialization process.

“It is an incredible honor to be named the first Lee T. Todd, Jr. Student Innovation scholar,” said Bertucci, who is also pursuing minors in computer science, photography and mathematics. “I have been involved in undergraduate research for the past three years at UK. To be able to continue that journey through engaging with Kentucky’s high-tech start-up community is a dream come true. I am beyond grateful to Lee T. Todd Jr. and CAER for making this exciting opportunity possible.”

Bertucci’s research is focused on recycling electronic waste in an environmentally responsible and economically feasible manner. His project as part of the Todd Scholarship will build on this experience, focusing on recycling of solar panels.

“By 2030, end-of-life solar panels will be worth a combined total of $450 million in recycling potential,” Bertucci said. “While the green energy revolution is sweeping the globe, little consideration is being put into what to do with broken, old and unusable solar panels. My proposal for this program is to develop an environmentally friendly and economically sustainable process for recycling solar panels.”

For the past three years, Bertucci has worked under the guidance of Jack Groppo and Josh Werner from UK’s Department of Mining Engineering. Groppo, a longtime CAER researcher, will serve as his research mentor as part of the Todd Scholarship.

“I am extremely proud of Lucas and thrilled he has this opportunity,” Groppo said. “Not only is he deserving of this opportunity, I think he has a chance to do great things. I look forward to continuing to work with him to see his dreams come true.”

For CAER, this Lee T. Todd, Jr. Scholarship program has been a passion for several years. It is a major thrust of the center’s philanthropic plans, and CAER is excited to launch the scholarship this fall.

“What makes this scholarship program unique is its focus on student creativity and innovation,” said Rodney Andrews, CAER director. “In most cases, undergraduate researchers participate in research projects that are driven by their mentor. Which is fantastic — we need more Kentucky students involved in undergraduate research. But we also need students to work on their own ideas while also being trained and encouraged to commercialize those innovations. This is especially true as we look to transition our energy infrastructure. Thanks to the Todd Scholarship program, Lucas will have an opportunity to do just that. We are excited to see what Lucas discovers and learns throughout the year.”

Lee T. Todd Jr. is a native of Earlington, Kentucky, and received his undergraduate degree in engineering from UK. He then received his Ph.D. from the Massachusetts Institute of Technology, before returning to the Commonwealth to join the faculty at the UK College of Engineering. Todd would go on to start two Kentucky-based high-tech firms — Projectron and DataBeam — before becoming the 11th president of the University of Kentucky. He is known across the Commonwealth for his commitment to inspiring the next generation of high-tech entrepreneurs and encouraging them to help reshape and modernize Kentucky’s economy.

“It is an honor to have any scholarship carry your name,” Todd said. “I can’t thank the Center for Applied Energy Research enough for naming this scholarship after me. To have this scholarship focus on energy, innovation and commercialization makes it that much more special. Congratulations to Lucas for being the first Todd Scholar. I can’t wait to see what he does this year and what he does in his career. With young people like Lucas leading the way, Kentucky’s future is looking bright.”

Bertucci is a member of the Lewis Honors College and is involved in Engineering Scholars in Undergraduate Research and the Dean’s Leadership Program. Bertucci has presented research at the 20th annual Posters at the Capitol and the 2022 Showcase of Undergraduate Scholars. He is a photographer who has had works displayed in the KMAC Museum, Speed Art Museum and Bolivar Art Gallery. Also, he is a Commonwealth Ambassador for the state of Kentucky.

Those wishing to support the Lee T. Todd, Jr. Student Innovation Scholarship can do so by donating to the endowment fund.

The University of Kentucky is increasingly the first choice for students, faculty and staff to pursue their passions and their professional goals. In the last two years, Forbes has named UK among the best employers for diversity, and INSIGHT into Diversity recognized us as a Diversity Champion four years running. UK is ranked among the top 30 campuses in the nation for LGBTQ* inclusion and safety. UK has been judged a “Great College to Work for" three years in a row, and UK is among only 22 universities in the country on Forbes' list of "America's Best Employers."  We are ranked among the top 10 percent of public institutions for research expenditures — a tangible symbol of our breadth and depth as a university focused on discovery that changes lives and communities. And our patients know and appreciate the fact that UK HealthCare has been named the state’s top hospital for five straight years. Accolades and honors are great. But they are more important for what they represent: the idea that creating a community of belonging and commitment to excellence is how we honor our mission to be not simply the University of Kentucky, but the University for Kentucky.