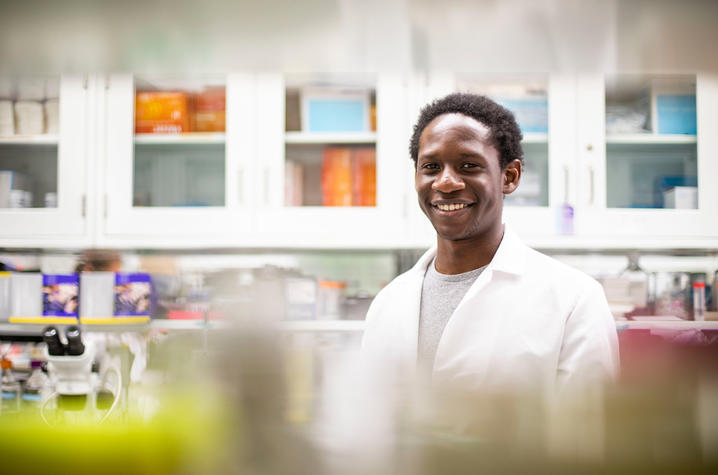 LEXINGTON, Ky. (Aug. 6, 2020) — For a couple of years now members of the University of Kentucky Spinal Cord and Brain Injury Research Center (SCoBIRC), in collaboration with UK College of Arts and Sciences, have been working to increase the representation of Black undergraduate students in neuroscience. “It is our obligation as professors and scientists to train the next generation of neuroscientists and to promote diversity and inclusivity in doing so,” said Mark Prendergast, director of the neuroscience B.S. degree program within College of Arts and Sciences.

Prendergast says he along with Dr. Joe Springer, director of the SCoBIRC, submitted a grant in 2018 to the National Institutes of Health Enhancing Neuroscience Diversity through Undergraduate Research Education Experiences (ENDURE) program to support African American undergraduate students at UK who wished to conduct independent research in neuroscience laboratories at UK. “That grant was not funded, but the drive to increase the representation of African Americans in neuroscience only intensified.”

Springer says the development of the program came together shortly after a College of Medicine Executive Committee meeting in which Dr. Stephanie White, associate dean for Diversity, Equity, and Inclusion, discussed the ongoing prevalence of racism and social injustice we all are facing. “Past efforts involved taking courses in unconscious bias and also in diversity, equity and inclusion. The problem with these exercises is that we were simply checking a box and then moved on without any type of meaningful follow-up,” he said.

The AARTS program will provide hands-on research opportunities in the field of neurotrauma. Springer says the goal is to expose the students to the state-of-the-art technologies and provide an intensive immersion into neurotrauma research activities as a way to prepare them to be successful independent researchers of the future.

Prendergast and Springer say this is a way that SCoBIRC can contribute to UK’s commitment to promoting access of members of the University community who belong to underrepresented groups to science, technology, engineering, and medical disciplines.

SCoBIRC is providing $25,000 to fund 5 yearly research training awards for undergraduate students in neurotrauma research through the AARTS program. The program is funded by support from the Kentucky Spinal Cord and Brain Injury Research Trust, which has provided funds specifically for trainees. The $5,000 scholarship program provides a generous summer stipend of $3,000 per student and an additional $2,000 to attend a national meeting to present their research project, network with their peers, and increase opportunities for furthering their careers. Qualified students from all majors are encouraged to consider discussing this funding opportunity with faculty conducting research on traumatic brain and spinal cord injury.  Qualifications include a minimum overall grade point average of 3.0, declared major in a STEM discipline and the commitment of a faculty mentor conducting research on neurotrauma.

In addition to Springer and Prendergast, neuroscientist Dr. Warren Alilain, and Zelneva Madison, who is the chief administrator for SCoBIRC in the College of Medicine, helped develop the AARTS program.

Faculty conducting such research may be identified at https://scobirc.med.uky.edu/.

The University of Kentucky is increasingly the first choice for students, faculty and staff to pursue their passions and their professional goals. In the last two years, Forbes has named UK among the best employers for diversity, and INSIGHT into Diversity recognized us as a Diversity Champion three years running. UK is ranked among the top 30 campuses in the nation for LGBTQ* inclusion and safety. UK has been judged a “Great College to Work for" two years in a row, and UK is among only 22 universities in the country on Forbes' list of "America's Best Employers."  We are ranked among the top 10 percent of public institutions for research expenditures — a tangible symbol of our breadth and depth as a university focused on discovery that changes lives and communities. And our patients know and appreciate the fact that UK HealthCare has been named the state’s top hospital for four straight years. Accolades and honors are great. But they are more important for what they represent: the idea that creating a community of belonging and commitment to excellence is how we honor our mission to be not simply the University of Kentucky, but the University for Kentucky.