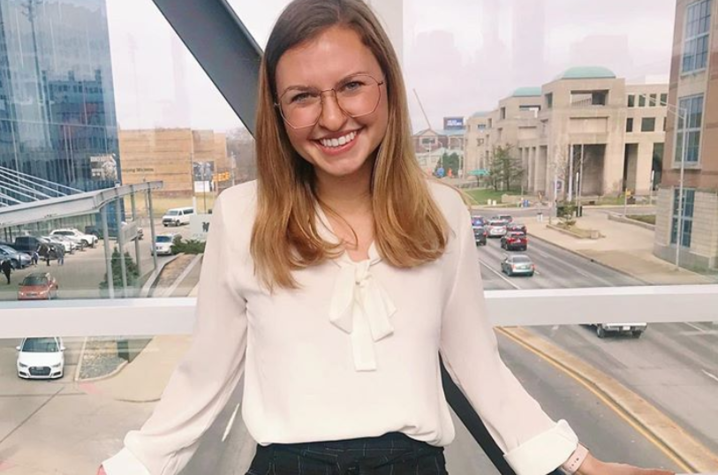 The Value of Involvement: A Profile of UK Student Sarah Ross

The oldest of four children, Ross felt grounded in Georgia: She had the responsibility to help care for her siblings; and many of her friends were staying home to attend the University of Georgia. But a UK campus visit gave Ross an immediate sense of place.

“We came to campus on a nasty, rainy day, but I still found the campus beautiful,” Ross said. “So many people I grew up with went to UGA … Lexington became mine.”

Ross believes that the late teens and early 20s are a good age for personal and career development — “before our brains are done cooking.” She shares some wisdom with incoming students.

“What matters the most is who you bring forth at the beginning,” Ross said. You’ll be terrified … but it’s bravery, curiosity, and ‘come as you are.’ Don’t pressure yourself to find your career right away. If you find you’re hating your classes, don’t beat yourself up … change! That’s the growth experience of college.”

Rushing a sorority was a defining moment for Ross. Even before arriving on campus, she found “UK has done a great job of eliminating the stereotypes of Greek life. Here, it’s all about values and connections, genuine and authentic.”

Her first connection was going through recruitment the week before classes started during her freshman year. “The week was exhausting, but after that — after constant conversations about what makes you who you are — I felt like I could talk to a brick wall.”

Ross fondly recalls one night during Recruitment Week: “We didn’t have preconceptions. We went into it with good intentions. On one recruitment night, we were super exhausted and deliriously hungry. We ordered from Tolly Ho’s, talked about life experiences and high school. That night was one of my favorite memories. And, really, my whole freshman year was an amazing experience.”

After pledging, Ross immersed herself in her sorority’s activities. She served in leadership roles in event planning and communications, bolstering her natural “people person” demeanor and helping to develop deeper proficiencies in interpersonal communications. She also became increasingly active in Panhellenic projects, working with the sisterhoods of all UK sororities on educational programs and a Spring Break safety initiative.

In 2020-21, Ross is representing Panhellenic as vice president of programming and will serve as a Gamma Chi (a recruitment counselor who guides young women through the recruitment process as they determine the chapter that is their best fit).

Fraternity and Sorority Life advisor emily britt describes Ross as a committed leader, both in her current role and last year when Ross was the Panhellenic delegate for her chapter, a position britt says is not as high profile as other offices, but very important to communication and spirit across the community.

“Sarah stuck out early on as a delegate because of her excitement for all the work the council was doing. She was invested in making sure she and her chapter were paying attention to what others were working on, participating actively and being excited about being Panhellenic women,” britt said. “I found out in her second semester that she had done such a good job in her chapter with making Panhellenic announcements fun — not always an easy task — that her chapter actively cheered when it was her turn in the meeting. Sarah made it obvious to her members how important it was to be engaged and was a great role model for her peers.”

When Ross first struck out for Lexington, she left home without knowing fully what she wanted to do as a career, or even a college major. A core course assignment during her first semester provided an immediate career catalyst.

“In high school, I did a project on implicit racism that inspired me to take Psych 100,” she said.

In that class, she was fascinated by the combined psychology/law studies of her professor, Jonathan Golding. After completing that course, and motivated by her mother’s work in behavioral development, Ross became increasingly confident that the road ahead would be guided by her joint interests in psychology and law.  She began to envision a career path that would lead in the direction of victim advocacy for children with special needs or to pursue a career in trial/jury science — a growth area within in the realm of courtroom litigation.

She began to envision a career in trial psychology and shifted her studies to include criminology and sociology. Working through UK’s Office of Undergraduate Research, Ross also began research work for Golding, who praises her work ethic and academic understanding.

“In my research lab, Sarah has been a real star,” Golding said. “Sarah was responsible for assisting me in running a mock-jury experiment investigating the impact of a jailhouse informant on legal decision-making. Not only did she help set up the complex methodology to run groups of participants (including videotaping deliberations), but she also helped with data scoring. Finally, I should note that Sarah had no previous exposure to my research. Nonetheless, she was extremely motivated to explore this research with me, asking insightful questions about previous studies and their relationship to my work.”

Between Panhellenic engagements and a full academic course load, Ross maintains a tight calendar — but this UK student has still found time to contribute to additional causes.

Her interest in victim advocacy — and her desire to be a voice for those who don’t always have one — was an important factor in her work for a nonprofit organization, an opportunity she found on the Handshake app offered by UK’s Stuckert Career Center. Key Assets Kentucky is an organization specializing in support services for youth with autistic or developmental disabilities. During her work there, Ross recognized some injustices inherent in the system that she will seek to overhaul in her future career; an example she cites as a niche area of law is autistic students having to appeal at age 18 to stay in the program through age 21 instead of being automatically extended.

Drawing together her sorority involvement, academic research and willingness to fight for good causes, Ross has also given time to projects that empower women. She says she feels like she grows alongside each of the women she has helped, and their experiences have helped to shape her determination to provide a voice for the voiceless. And her many and varied activities never came at the expense of her academic pursuits — she’s made the Dean’s List every year and was inducted into the 100-year-old national honor society, Omicron Delta Kappa, in her junior year.

As Ross continues her senior year, she offers a few words of wisdom to students who are in their early undergraduate years at UK: “These four years will be what you make out of them. If you go in with a negative attitude, you’ll have a negative experience.” On the other hand, “choosing involvement right from the start helps you ‘find your people.’ I feel at home because I’m with people who make me feel alive and make me feel like I’m ‘me’ more than I ever have.”

The University of Kentucky is increasingly the first choice for students, faculty and staff to pursue their passions and their professional goals. In the last two years, Forbes has named UK among the best employers for diversity, and INSIGHT into Diversity recognized us as a Diversity Champion three years running. UK is ranked among the top 30 campuses in the nation for LGBTQ* inclusion and safety. UK has been judged a “Great College to Work for" three years in a row, and UK is among only 22 universities in the country on Forbes' list of "America's Best Employers."  We are ranked among the top 10 percent of public institutions for research expenditures — a tangible symbol of our breadth and depth as a university focused on discovery that changes lives and communities. And our patients know and appreciate the fact that UK HealthCare has been named the state’s top hospital for four straight years. Accolades and honors are great. But they are more important for what they represent: the idea that creating a community of belonging and commitment to excellence is how we honor our mission to be not simply the University of Kentucky, but the University for Kentucky.